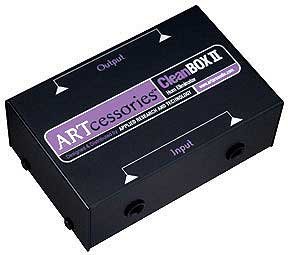 ART CleanBOX II Hum Eliminator - hum in an audio system is often caused by loop effects which act like antennas. These loops can easily pick up a 60Hz (or higher harmonics) hum transmitted by electrical wiring. Typically, these loops are connected via grounds, more commonly called 'ground loops'. The safest way to eliminate unwanted noise is with the Cleanbox II. Some examples of ground loops: the power ground of a synthesizer, connected to the signal ground of the synth, into a mixers ground, then into a mixers power ground. The signal ground of a send effect (reverb, delay) into a mixer, and the connecting power grounds of the mixer and the unit. The power ground of a guitar amplifier, connected to a signal processor which has a second guitar amplifier on the other channel, and then the second guitar amps power ground. The Cleanbox II easily removes ground loops without any signal degradation.